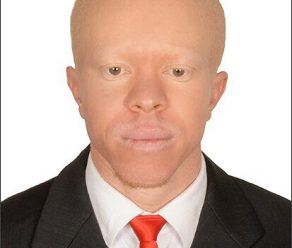 Rene is one half of the rap duo White African Music. Cameroonian brothers Rene and Clifford Boma are fighting against the stigma of being albinos in Africa by using their rap music to raise awareness about the discrimination and social ills persons living with albinism face on a daily basis. Performing as rap duo White African Music, the Boma brothers claim their venture into rap music has not just shaken off the fear related to being an albino in Africa but also helped them channel their message to various African countries; that being albino does not restrict anyone from achieving their goals and aspirations. They explain, “We heard stories of albinos who have been killed and offered as sacrifices to the gods to cleanse the land from any form of calamity, so it was culturally and socially risky growing up as an albino.With all that rage in you, with all that frustration, we had to cope with the pen on paper. We had to spend most of that time writing poetry and rhymes,” the brothers reveal.

Living with albinism in Africa remains one of the continent’s greatest challenges, as, albinos continue to suffer from a heightened rate of stigmatization, ritual murders, and sexual abuse.  According to an Amnesty International report mentioned in a recent Face2Face Africa article, “Women and children with albinism are particularly vulnerable to abductions and killings by criminal gangs, who see them as easier targets. Women also face the danger of rape and sexual abuse as a result of beliefs that having sex with a person with albinism will cure HIV/AIDS.” As of now, Malawi holds the sad record for the most disturbing cases of attacks against albinos. A human rights specialist for the United Nations has warned that Malawians living with albinism are at the highest risk of extinction should practical measures not be put in place